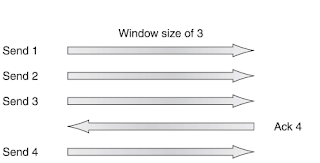 The rate at which information is shared will be very slow, if the person sending the information has to always hold on for every information sent to be acknowledgment anytime a segment is sent.
The reason for this is simply because there’s  a time frame available from the moment the sender transmits a segment and before it finishes processing acknowledgments from the receiving personal, the sender uses the break to transmit more data.

The quantity of data segments the transmitting machine is allowed to send without receiving an acknowledgment for them is called a window.
The main purpose of Windowing in networking is to controls how much information that is being shared from one end to another.
While some protocols quantify information by observing the number of packets, TCP/IP measures it by counting the number of bytes.
In the diagram above there is a window size of 3.
it’s allowed to transmit three data segments before an acknowledgment is received. In our simplified example,both the sending and receiving machines are workstations. Reality is rarely that simple, and most often acknowledgments and packets will comme as they travel over the network and pass through routers.
Acknowledgments
Every good data delivery makes sure that the integrity of a stream of data sent from one machine to the other flows through a fully functional data link.When an
acknowledgement is being received,  It guarantees the sender that data was neither duplicated or lost.
This process known as positive acknowledgment with re transmission. This process requires the  receiving  partner to communicate with the transmitting source by sending an acknowledgment message back to the sender when it receives data.
The sender must documents each segment he has sent and waits for this acknowledgment before sending the next segment.
When it sends a segment, the transmitting machine starts a timer and re transmits if it expires before an acknowledgment is returned from the receiving end.