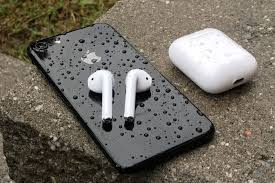 In a report from Bloomberg is obvious that Apple may have plans on upgrading its wireless headphones so quick  this year or later in 2019.
Looking at the speed at which apple is rolling out updates, there is no doubt that this might come earlier than we expect.
We are also expected to see some hardware upgrades as planned by apple. A leak on the upgrade might include one of the star features would be the ability to invoke Siri hands-free using the “Hey Siri” command. This would eliminate the need to double tap the AirPods every time.

After the upgrade Siri would now be accessible hand-freely, the same way as on iPhone, iPad, and the company’s newest speaker, HomePod. In addition to new hands-free Siri command, apple might also likely to include an upgraded Apple-designed wireless chip for managing Bluetooth connections. Currently, AirPods feature the W1 chip inside and Apple released the W2 with the Apple Watch late last.
The report also mentioned that we could see a subsequent model next year that will bring water resistance to the wearable. It’s noted in the report that they likely won’t be designed to be submerged in water, but will be able to withstand splashes as well as rain.
The report appears to be brought in part by an unnamed source that wished to remain anonymous and as usual Apple declined to comment.