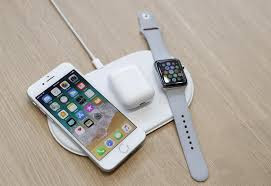 A little before, The Apple Post, as information given Best Buy, that Apple is going to sell Qi wireless charge Pad ,”AirPower” and AirPods Qi wireless charging case complied with AirPower coming this the March.

According to a tipster at American retailer Best Buy, Apple is preparing to launch the AirPower wireless charging mat and new AirPods wireless charging case in March, claiming that Best Buy will stock AirPower from day one online and in-store.
And unit selling is only by Apple Store and other shops will sell AirPods and AirPods Qi wireless charging case, it reported.
Announced by Apple in September, AirPower is an oval-shaped white charging mat featuring Qi-compatible networking technology that will allow it to charge multiple devices at once. Along with an iPhone 8, iPhone 8 Plus, or iPhone X, and the Apple Watch Series 3, the AirPower charges.
AirPods thanks to a new wireless charging AirPods case that’s also set to be released sometime soon. The source reports Best Buy will begin receiving AirPower units in-store towards the end of March (likely the same time Apple begins retailing the accessory themselves), with Apple sending additional units to be used as store demos/displays.

Best Buy is an Apple Authorized Service Provider, and most stores offer a designated area specifically for Apple products.

The tipster has asked to remain anonymous, and as with any leak/insider tip it’s difficult to determine the legitimacy of the claims submitted. That being said, with the prospect of new Apple hardware launching in March, and the fact AirPower is expected to launch within Q1 2018 the claims could indeed prove to be true.

Right now our best guess is that Apple’s AirPower wireless charging mat will cost around $199 in the United States, based on a price listing for the accessory that appeared on a Polish website in November.

One thought on “Apple To Launch AirPower and new AirPods wireless charging case in March.”