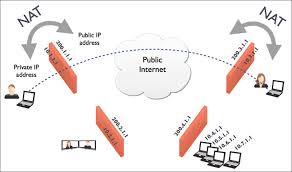 Network Address Translation (NAT) is a configuration  process that allows  a network device, usually a firewall tool, to  assigns a public address to a computer (or group of computers) inside a private network. The main essence  of NAT in a network is to limit the number of public IP addresses an organization or company must use, for both economy and security purposes.

The most common form of network translation involves a large private network using addresses in a private range (10.0.0.0 to 10.255.255.255, 172.16.0.0 to 172.31.255.255, or 192.168.0 0 to 192.168.255.255). The private addressing scheme works well for computers that only have to access resources inside the network, like computers needing access to file servers and printers.
Routers inside the private network can route traffic between private addresses with no trouble. However, to access resources outside the network, like the Internet, these computers have to have a public address in order for responses to their requests to return to them. This is where NAT comes into the scenario .

Internet requests that require Network Address Translation (NAT) are quite complex but happen so fast in mili seconds  that the end user rarely noticed it has occurred.
The process will like this : A workstation inside a network makes a request to a computer on the Internet. Routers within the network recognize that the request is not for a resource inside the network, so they send the request to the firewall.
The firewall sees the request from the computer with the internal IP. It then makes the same request to the Internet using its own public address, and returns the response from the Internet resource to the computer inside the private network. From the perspective of the resource on the Internet, it is sending information to the address of the firewall.
From the perspective of the computer or gadgets, it appears that communication is directly with the site on the Internet. When NAT is used in this way, all users inside the private network access the Internet have the same public IP address when they use the Internet. That means only one public addresses is needed for hundreds or even thousands of users.