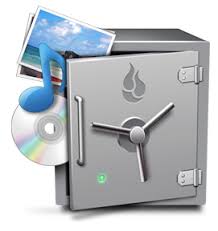 The main reason for configuration backup is to  back up MikroTik RouterOS configuration done into a single file, which can be stored on the router or downloaded from it using FTP or Winbox for future use. The configuration restore can be used for restoring the router’s configuration, exactly as it was at the backup creation moment, from a backup file. This process for this configuration is simple and the features pretty good.
The restoration procedure will have to align on same the configuration that is going to be restored on the router, where the backup file was originally created, or similar to it  so it will create partially broken configuration if the hardware has been altered by any means.all the same some changes can be made while restoring files usinf terminals.
Here will start our backup procedures by lunching our winbox application, click on files , click on backups on the top tag. You will noticed that by default all backups are encrypted. 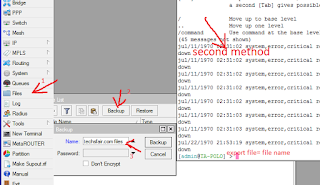 unless you choose the option to decrypt the file but  I always want it to remain encrypted because this is a good measure taken in place by mikrotik to avoid unauthorized access to your network, offcourse you should know that this files contains all the password, and all user ID, wifi password etc. so next time we going to give it a name, no password hence it is encrypted, click on backup.
By doing this we have created a backup of the your router.
Restoring this backup is also simple all you need to do is to click on restore and allow the router to reboot and do the initial process.
So another method of doing this particular backup is by going through the terminal and using commands.
We are going to click on new terminal and then a window will pop. The command for doing file backup is:
Export space file equal and then the file name [export file= file name].
And then press enter.
In other to view the files, move them to desktop by click and hold draging and dropping to the desktop.
The configuration export can be used for dumping out complete or partial MikroTik RouterOS configuration to the console screen or to a text (script) file, which can be downloaded from the router using FTP or Winbox. The configuration dumped is actually a batch of commands.