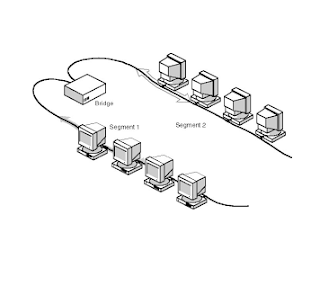 Bridge: A bridge is an older version of a switch. It has the same basic functionality of a switch, but it has fewer ports and is a software based component, rather than this current normal today hardware based switch.
It provides interconnection with other bridge networks that use the same protocol.
Bridge devices work at the data link layer of the Open System Interconnect (OSI) model, connecting two different networks together and providing communication between them. Bridges are similar to repeaters and hubs in that they broadcast data to every node. However, bridges maintain the media access control (MAC) address table as soon as they discover new segments, so subsequent transmissions are sent to only to the desired recipient.

Network bridge functionality allows it joins two otherwise separate computer networks to enable communication between them and allow them to work as a single network. Bridges are used with local area networks (LANs) to extend their reach to cover larger physical areas than the LAN can otherwise reach. Bridges are similar to—but more intelligent than—simple repeaters, which also extend signal range.
Categories Of Network Bridges.
Bridging is especially popular on Wi-Fi computer networks. In Wi-Fi, wireless bridging requires that access points communicate with each other in a special mode that supports the traffic that flows between them.
Two access points that support wireless bridging mode work as a pair. Each continues to support its own local network of connected clients while additionally communicating with the other to handle bridgig traffic.
Bridging mode can be activated on an access point through an administrative setting or sometimes a physical switch on the unit.
Network bridge devices exist for Wi-Fi to Wi-Fi, Wi-Fi to Ethernet, and Bluetooth to Wi-Fi connections. Each is designed for specific kinds of networking.
Wireless bridges support Wi-Fi wireless access points.
Wi-Fi to Ethernet bridges allow connections to Ethernet clients and interface them to a local Wi-Fi network, which is useful for older network devices that lack Wi-Fi capability.
A Bluetooth to Wi-Fi Bridge supports connections with Bluetooth mobile devices that have proliferated in homes and offices in recent years.
How Network Bridges Work
Bridge devices looks up for the  incoming network traffic and determine whether to forward or discard it according to its intended destination.
An Ethernet bridge, for example, filters each incoming Ethernet frame including the source and destination MAC addresses—sometimes the frame size—when making individual forwarding decisions.
Difference between Bridges and Repeaters
Bridges and network repeaters share the same infrastructural design; sometimes, a single unit performs both functions. Unlike bridges, however, repeaters do not perform any traffic filtering and do not join two networks together. Instead, repeaters pass along all traffic they receive. Repeaters serve primarily to regenerate traffic signals so that a single network can reach longer physical distances.
Characteristics Of a Network Bridges
A bridge maintains same protocol.
Operates only on the Data link layer:
PDU of this layer is called frame.
Bridge can understand only the MAC addresses.
A bridge does not operate at net layer so it can’t understand IP addresses & therefore can’t recognize protocols.
A bridge uses an interface address table to know which computers are connected to which segments.
Entries in a bridge table are SOURCE from which the bridge has received the frame & the PORT (MAC) address. By doing this it can know which computer is connected to which port Working:
When a Bridge receives a frame, it checks the destination address of the frame. If the destination is present in the interface address table, it forwards the frame. If the destination is not present in the table, the bridge broadcast the frame on the all outgoing ports (except the port from which it arrived). This is called flooding.Bridges lack the intelligence of network routers.