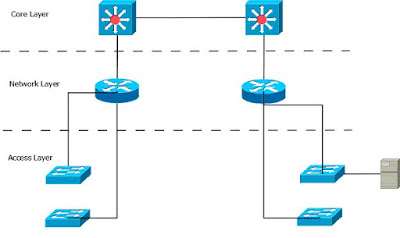 In a hierarchy, authority, responsibility and job function are clearly defined, along with the road to promotions. Communication is clear, since it travels directly from top to bottom, so everyone knows exactly what his duties are. Hierarchies organize people into departments and teams that lead to teamwork and motivation. Since decisions have to travel from top to bottom, and communication from bottom to top, hierarchies respond slowly to new information and changes and have a bureaucratic decision-making process. Departments more focused on their own goals than company goals can lead to rivalries and selfish decisions.

To stress this further more hierarchy is a way of doing things in an orderly manner, ranging from top to bottom or from button to the top. In this form, at a glance one will be able to easily identify where things are suppose to be and easily place them in accord without too many questions, this seems to be one of the key rules hierarchy plays in real life scenario, also when it comes to networking, the concepts are almost the same, things has to be well structured to ascertain network stability and obtain maximum throughput.

The following are The Three Networking Hierarchical -Layers

Each layer has specific responsibilities.

The core layer is literally the core of the network. At the top of the hierarchy,

and quickly. The only purpose of the network’s core layer is to switch

traffic as fast as possible. The traffic transported across the core is common to

a majority of users. However, remember that user data is processed at the distribution

layer, which forwards the requests to the core if needed.

If there is a failure in the core, every single user can be affected. Therefore,

fault tolerance at this layer is an issue. The core is likely to see large volumes

of traffic, so speed and latency are driving concerns here. Given the function of

the core, we can now consider some design specifics. Let’s start with some

things we don’t want to do.

_ Don’t do anything to slow down traffic. This includes using access

routers). If performance becomes an issue in the core, give preference

to upgrades over expansion.

Now, there are a few things that we want to do as we design the core.

that facilitate both speed and redundancy, such as FDDI, Fast Ethernet

(with redundant links), or even ATM.

_ Design with speed in mind. The core should have very little latency.

redundant data-link connectivity is no help if your routing tables

is the communication point between the access layer and the core. The primary

function of the distribution layer is to provide routing, filtering, and

WAN access and to determine how packets can access the core, if needed. The distribution layer must determine the fastest way that network service

requests are handled; for example, how a file request is forwarded to a

server. After the distribution layer determines the best path, it forwards the

to the correct service.

The distribution layer is the place to implement policies for the network.

Here you can exercise considerable flexibility in defining network operation.

layer. They include the following:

_ Implementation of tools such as access lists, of packet filtering, and of

_ Implementation of security and network policies, including address

_ Routing between VLANs and other workgroup support functions

_ Definitions of broadcast and multicast domains

exclusively belong to one of the other layers.

The access layer contains devices that allow workgroups and users to use the services provided by the distribution and core layers. In the access layer, you have the ability to expand or contract collision domains using a repeater, hub, or standard switch. In regards to the access layer, a switch is not a high-powered device, such as those found at the core layer.

Rather, a switch is an advanced version of a hub.

At the access layer, you can:
Enable MAC address filtering: It is possible to program a switch to allow only certain systems to access the connected LANs.
Create separate collision domains: A switch can create separate collision domains for each connected node to improve performance.
Share bandwidth: You can allow the same network connection to handle all data.
Handle switch bandwidth: You can move data from one network to another to perform load balancing.